Bringing the Leadership of Stony Brook’s Mission into the Classroom

Engineering Innovation and Design (EID) is the flagship course of the Stony Brook School’s Engineering curriculum. It is an entirely project-based course filled with students that have taken at least two semesters of Robotics, Computer Programming, and 3D Modeling. Most often, they have a real passion in the subject area and plan to pursue Engineering at the college level. These are the students who can be found in the STEM lab at odd hours: free periods, lunch, after school, nights, and weekends.

Now that the STEM program is five years old, we are finding that many of our EID students choose the school specifically for the chance to be in this course. These students have produced works ranging from kinetic art, to day-to-day fixes for needs on campus, to wind turbines designed to bring sustainable power to the most impoverished areas of Haiti. It is an impressive group that pushes us each day to become better teachers and guides through their journeys as engineers. 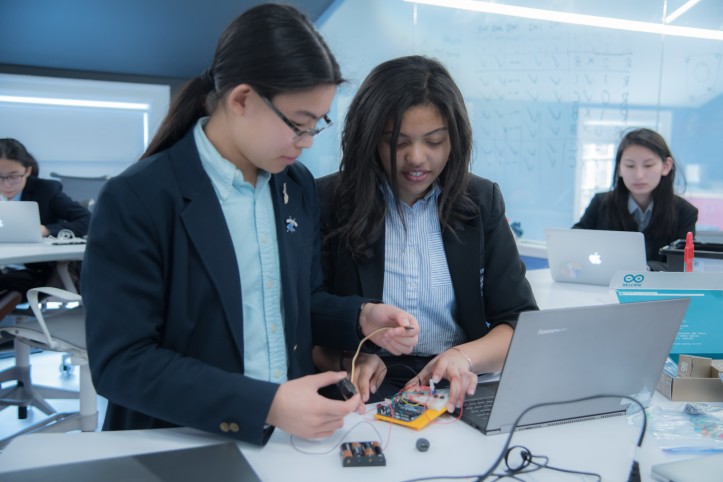 In the spring semester of 2018, our twelve students had six active projects that they would develop over the course of the semester—two new projects and four projects continuing from previous semesters. The projects generally needed three areas of expertise among their group members: builders, 3D designers, and programmers. Inherent to the process of carrying out these projects, the students would hit roadblocks that took time to overcome. Sometimes they were waiting for materials to ship. Sometimes the design needed a tweak. Sometimes the builders would finish a particular task before the programmers, or vice versa.

In order for us to provide meaningful feedback, maximize time on task, and keep tabs on project progress, it became obvious to us that we needed to get more organized and be intentional about student management. Out of that necessity, our EID Leadership Matrix was born. 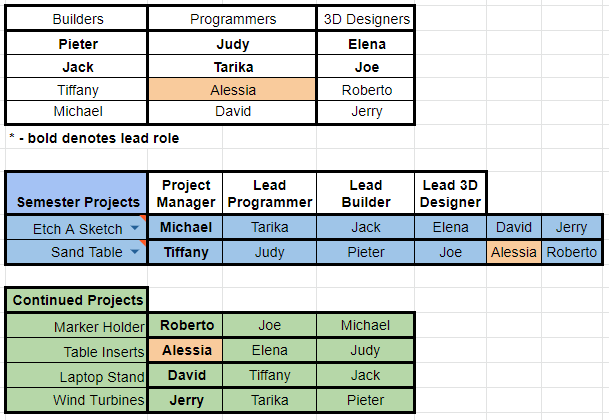 Note that each student’s name appears in three places: a new project group (blue), a continued project group (green), and a field of expertise. Each of the six projects received a project manager, and each specialty had two leaders. This meant that each of the twelve students was a leader in one area and a follower in two others (Alessia is highlighted to illustrate this distribution).

Project managers were accountable for timelines, budgets, vision-casting, and decision-making. Specialty leaders were tasked with managing the advancement of their project in their area, providing support for classmates who needed help, and re-assigning those under their leadership when there wasn’t a specific task to be completed at a given time.

For some of our students, leadership was natural but taking direction forced some uncomfortable growth. For other students, leading was a stretch, and we would have to push them to communicate and delegate rather than letting them complete the whole project by themselves.

Students never had an excuse not to be on task. If Alessia was waiting for the 3D print of the latest iteration of her Table Insert project, she could hop over to the Sand Table group and see if they needed her help, or check in with Judy or Tarika to see if any groups needed a programmer at the moment. Authentic, meaningful collaboration was happening in every corner of the lab over the course of the entire semester.

By organizing the projects this way, we found that student engagement and investment were through the roof. They also were not nearly as dependent on us. Once a student was named a leader over a given project, they felt empowered and emboldened to speak into decisions being made in their areas of responsibility. What they did not know, they would research or delegate. On-demand learning was the daily norm. Students assigned as followers would work to meet the requests of their student leaders to make sure that they were not the reason for a failed prototype or a missed deadline. At any given time, students in the class would be thrilled to present on the developing projects when tour groups would come through campus.

Students developed a greater sense of pride in the works they completed, and some healthy competition formed as groups neared completion and measured their work against one another. Perhaps most meaningfully, students were willing to risk taking on bigger tasks than they would on their own, because they knew that they had support in place. By taking full responsibility and experiencing genuine failure, students learned and grew from the things that did not work—a fundamental component of the engineering process. We believe that recognizing failure as a critical step to growth will help to reduce the anxiety and stress related to perfectionism, especially for a class full of students who are generally unaccustomed to anything lower than A’s on their schoolwork.

Stony Brook has always prized leadership, even listing it in our school’s mission as one of the indispensable traits of an SBS graduate. We found that intentionally carving out genuine, authentic leadership opportunities in a classroom environment raised the level of performance for everyone involved. We pray that the life skills cultivated in this structure will serve our students for a lifetime.

This piece is taken from the 2019 Winter/Spring edition of our Bulletin. You can access the online version here. 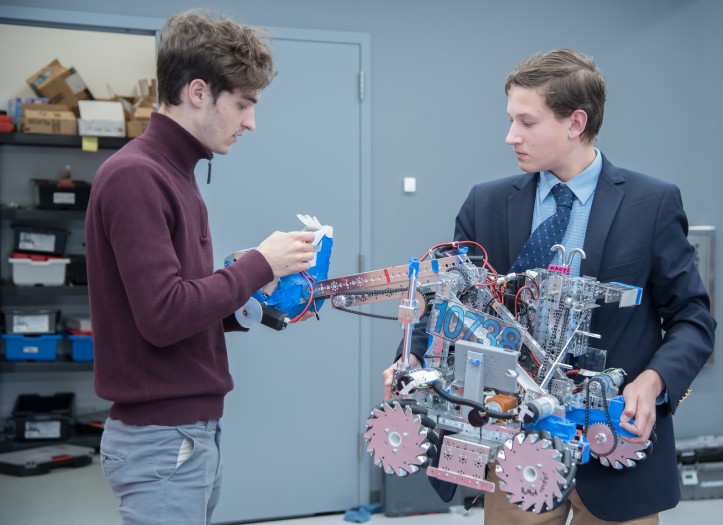