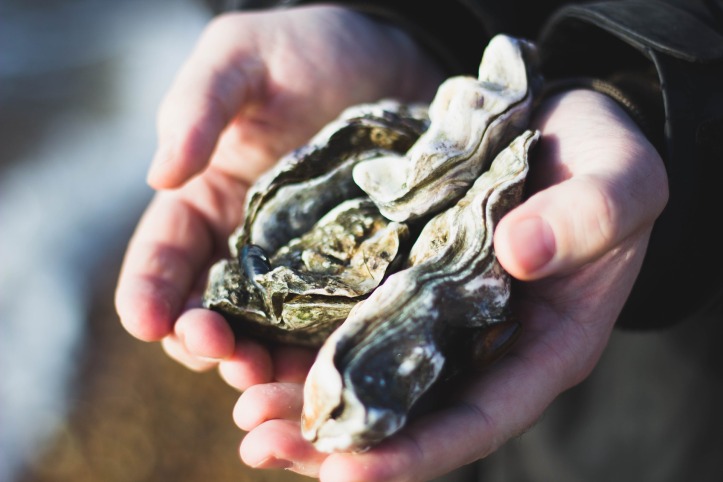 Stony Brook students are lending some important legwork to a much-needed proposal to solve a pollution problem in Long Island waters.

Over the past year, The Stony Brook School has forged a partnership with The Stony Brook Yacht Club (SBYC) and its mariculture program, the non-profit arm that does research and cultivates local shellfish habitats.

The partnership began when Mike Hickey, who teaches Advanced Placement Environmental Science at the School, began conversing with Edward Zero, the head of the mariculture program at SBYC. Mr. Hickey invited Mr. Zero to present in his classes. In turn, Mr. Zero invited the AP Environmental Science students to volunteer with some of the program’s projects.

As the students began to work more closely with the SBYC, Mr. Zero shared the club’s vision for an oyster sanctuary across from the Yacht Club at Youngs Island, in Stony Brook Harbor. Youngs Island, a man-made stretch of sand about half a mile long, sits opposite Sand Street Beach, roughly a mile from the School.

The goal of the proposal is to re-establish a significant oyster population in Stony Brook Harbor. If the proposal goes through, a boundary would be established to create a no-harvest zone off the island.

The idea for an oyster sanctuary took root as early as the fall of 2015, during a Stony Brook Harbor Task Force meeting. The members agreed that the proposal was environmentally watertight, and would prove to be a project with huge ecological benefits. They estimated that they could build the sanctuary quickly and with little cost.

They surveyed the waters near the yacht club, and determined Youngs Island would be the ideal location. The sanctuary would initially be small, only 120 square feet, but large enough to house 4,000 starter oysters. The protection zone would be marked off by signs, though the task force determined it would be best to make them moveable, in case future dredging. According to Mr. Zero, who drafted the plan, the larvae these oysters produce will re-seed the harbor and will be the source of future harvests far outside the boundaries of the sanctuary. By developing and protecting the brood stock, he expects that the availability of robust, native oysters in adjacent waters will increase quickly.

Since its initial draft, SBYC has been working to formalize the proposal, and to get the nod from the proper governing entities. As of March of this year, it has been approved by the Brookhaven Township and the New York Department of Environmental Conservation. They are currently seeking approval from Smithtown, since Youngs Island and the surrounding channels straddle both townships.

Smithtown did not approve their proposal immediately. There were some concerns that a no-harvest zone would hurt local fisherman.

Stony Brook students had been lightly involved with the initial development of the proposal, but when it was rejected by Smithtown, two seniors, Sina Fayaz Monfared and Avalon Zborovsky-Fenster, stepped in to push it through. Avalon wrote letters to persuade politicians. Sina headed up a business club tasked with the mission to crunch numbers and research the sanctuary’s long-term commercial benefits. Together, the group drafted an amendment to the proposal, pointing out that one healthy oyster can produce 100 million oyster eggs in one’s years time.

Their conclusion: Rather than being at odds with this environmental change, the fishermen would be the ones most likely to benefit from it. “Our research demonstrated that if this proposal is approved, and the sanctuary is installed, the number of oysters will astronomically increase, which will generate enormous profit for local fisheries,” said Sina.

According to the proposal, “Commercial oystermen would be able to sustainably harvest many more oysters in the Harbor than they do currently. The proposal, if accepted, would likely transform the Stony Brook Harbor into a perpetually lucrative region for the harvest of oysters in the state of New York.”

The Stony Brook Yacht Club has a long and successful track record of raising clams and oysters. Eight years ago, they formally established a mariculture committee, which has since worked to create a strong relationships with the Division of Environmental Protection in Brookhaven and the NY Department of Environmental Conservation. Since 2011, SBYC has raised and distributed more than one million shellfish throughout Stony Brook Harbor.

Thanks to Mr. Hickey’s science class, many of those shellfish have been seeded directly by the hands of Stony Brook student volunteers.

Early one May morning last year, 15 volunteers from The Stony Brook School and the Avalon Park Preserve reported to Brookhaven’s Mariculture Facility in Mount Sinai. Their mission was to move cages of oysters from the harbor into the facility. It was a labor-intensive process, and required no shortage of brawn. Later that day, they sorted oyster and clam seeds that would later be distributed to several non-profits across Brookhaven. The volunteer team also had the chance to select its own seeds, and then had a truck carefully transport them to the SBYC research area.

The next day, 30 volunteers arrived at the research spot, armed with specially designed rafts and mesh grow bags. They placed the clam seeds into newly constructed floating clam cages. They then secured the oyster seeds into the bags, and loaded them onto caged shelving.

The bags for these shellfish have a unique design. Whereas wild oysters tend to grow at the bottom of the sea floor, increasingly oyster farmers are growing oysters at the water’s surface, since that is where food (mostly phytoplankton) is plentiful. The rocking waves help shape the deep cup of the oysters, and the mesh bags allow for adequate water flow, giving oysters more nutrients. The mesh bags also shelter the oysters from predators, and give them a safe place to thrive.

Predators may be one concern in the Long Island Sound, but a bigger challenge is making sure the oysters grow, stay healthy, and proliferate.

Over the summer, the Yacht Club monitored the shellfish growth. In October, Mike Hickey and Sarah Fay, the SBS Science Department Chair, took students to a larger area, seeding another batch of shellfish throughout Stony Brook Harbor and in Smithtown Bay, with town and state approval.

These seeding projects have largely been for research. Generally they have been able to restore shellfish populations in the harbor on a small scale, though it is difficult to know how many new larvae they will produce, since they are not protected by a no-harvest zone.

The hope of the SBYC mariculture program is that an official oyster sanctuary will not only protect growing oysters, but will also cultivate a brood stock for the rest of Stony Brook Harbor.

Why the need? It is true that Long Island was once famous for its abundant oyster trade in the 18th and 19th centuries, but recent decades have seen a sharp decrease in oyster reef numbers around Suffolk county.

This has been dismal news for many. For fishermen, the depleted reefs have meant fewer harvests, and in turn a blow to their livelihoods.

But a disappearing oyster population has spelled out numerous losses to the environment as well. Oysters are indispensable to a marine ecosystem. They filter water naturally, cleaning it from pollution and excess nitrogen, making it safe for aqualife to flourish. Oyster shells encourage marine diversity. Other bay organisms, like barnacles, mussels, and anemones, thrive on the hard bottom that oysters create with their shells. These reefs provide a nursery for baby crabs and small fish, protecting them from predators.

Oyster reefs also promote healthy coasts. They reduce erosion, and they buffer coasts from harsh waves, creating calmer areas for marshes and seagrass beds. Seeing them disappear from the Long Island coasts has truly been devastating in more ways than one.

Depending on whom you ask, the reef decline can be blamed on over-harvesting, disease, or even storms, like the Great Hurricane of 1938 or Hurricane Sandy of 2012. But most will say that the bulk of the problem lies with pollution—specifically nitrogen pollution, which can create malignant algal blooms.

An overabundance of algae can wreak havoc on an ecosystem. At worst, they might create toxins that poison an oyster harvest. But even if the algae is not toxic, it can still create brown tides which block sunlight, siphon off oxygen from submarine life, and stunt shellfish growth.

But if oysters filter water naturally, would it not stand to reason that they would be able to filter the nitrogen out of Long Island’s polluted waters?

Not at these levels, according to Mike Hickey. “Take the Chesapeake Bay,” he said. “It’s the largest estuary in the United States. Millions—maybe billions—of oysters filled its waters. It used to be that oysters could clean the whole bay in three days. Now it takes a year.”

What happened? “Pollution,” he said. “In the Chesapeake Bay, most of it is agricultural runoff, like from hog farms. In Long Island, you have that, plus sewage.” (Suffolk county is infamous for its dated septic system.)

Understandably, the Stony Brook Yacht Club and other mariculture organizations have a vested interest in restoring an oyster population to the Sound.

As of March 2019,  the sanctuary has been reviewed by the Town of Smithtown and was tentatively approved, pending an agreement regarding insurance coverage and oversight responsibilities.

Stony Brook students and the SBYC members are hopeful that the proposal will be approved later this year, in time for seeding this fall. “Whatever the final outcome is on the sanctuary proposal, the effort put forth by the staff and students of The Stony Brook School should be applauded,” said Mr. Zero. “Their involvement has served to enhance the SBYC’s goal of promoting local environmental stewardship, and creating a shellfish renaissance in the region.”