This past November, we tried out a new scheduling model aimed at increasing learning opportunities and adding some sanity into the daily routines of students. With fewer transitions and fewer subjects to prepare for each night, our hope was that we would see an increase in the quality of student work, an easier adoption of pedagogical methods proven to promote student engagement, and healthier sleep and study habits. We designed Wednesday mini-course to allow students to make better use of the resources we have on Long Island and in the city. Students signed up for three-week all-day courses in areas of their passions. Some stayed on campus to participate in interdisciplinary, project-based learning, while others went off campus to sites in New York City, Connecticut, and all over Long Island. Two groups even worked with professors at Stony Brook University across the street.

Student Feedback
Student survey results from 120 students showed strong support for the new model, with 80% saying they believed they learned the same amount or more, 92% claiming the pace was as or more manageable, and 80% saying they experienced somewhat less or much less anxiety. 91% said they got as much or more sleep each night. 86% reported good to excellent quality on the mini-courses (41% giving their course the highest rating), a testament to our teachers’ creativity and commitment. On the whole, 74% of the students preferred the new schedule to the old, with 13% neutral and 13% preferring the current year’s model.

Student feedback was very thoughtful. Below are some representative quotes in favor of the new model:

I was able to focus more in class due to the extended time per class. Also when doing homework I was able to put more time into each subject rather then rushing to try and finish all of them in one night.

The new schedule has enabled me to concentrate on one specific subject for a prolonged and much more dedicated period of time, which has greatly enhanced the amount of material I have learnt and UNDERSTOOD. Plus, the new schedule made my days a lot less stressful, which also helped a lot.
I feel that I was able to learn more in the new schedule, due to the fact that there are less transition periods. The longer class periods also give us time to engage in group projects, which personally help me understand the concepts better.

I would say we learned about the same amount, it just wasn’t spread out over several days. I was surprised, I didn’t think we would get a lot done.

I thought I wouldn’t be able to concentrate through all the block periods but I surprised myself by doing so. I thought that the longer block periods actually helped me learn more since the teacher had more time to explain topics and answer questions.

A few students provided helpful negative feedback as well, as represented below:

I feel that it was harder to remember what we learned in the first class of the week because it was such a long span of where your main focus was on other classes.

Some courses require shorter, more frequent periods of meeting (science, some math courses, some history courses) in order to instill the knowledge into the students.

It is true that we can learn more during class period, but since we only have each subject twice a week, I feel like I’m not really learning continuously because of the 2-day gap between every class.

An Alternate Model
We also surveyed the faculty, who likewise supported a change, with only 32% favoring the old schedule. In response to student and faculty input after trying out the schedule, we made some adjustments to the model to make it even better. With the alternative model (discussed below) in the mix, faculty support for the old model dropped to 19%, with 66% supporting the alternate model. On the basis of that feedback, we will launch the alternate model next school year.
The alternate model addresses a few of the most serious concerns about the November trial model. First, some faculty and students were concerned about standard classes only meeting twice a week. The alternate model allows classes to meet three times per week, twice in 75-minute blocks and once for a 35-minute class period. Second, students and faculty suggested that the Wednesday mini-courses were a bit too long. So, on the alternate model, the afternoon sessions is cut down by a half-hour. Third, there was some concern about the number of minutes lost per class over the course of the year. The alternate model recoups some of those lost minutes. Once the finer details of the alternate schedule are finalized, we will publish it for students and parents to see. We believe that the alternate model will deliver the benefits students experienced during the November trial while addressing some of the concerns raised by the community. In the end, this is why we ran a trial. We wanted to see what worked and what did not work so we could make adjustments on the basis of feedback from those most impacted by institutional decisions.
Course Registration, Internships, and Research Opportunities
Later this Spring, students will sign up for their standard courses (largely unchanged from this past year) and for six four-week mini-courses. The mini-course program for 7th-9th graders will be largely prescribed, while 10th-12th graders will be able to elect most of their mini-courses. Our aim in developing these courses is to promote project-based learning, research opportunities and competition preparation, interdisciplinary studies, service learning opportunities, and off-campus excursions. Students interested in internships and research opportunities should be thinking now about their goals. We are in the process of developing connections to local laboratories and businesses. Parents interested in offering a Stony Brook student an internship or research opportunity should contact Sean Riley.

And now for some photos from the mini-courses! 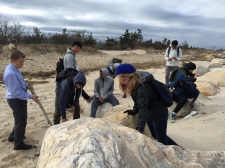 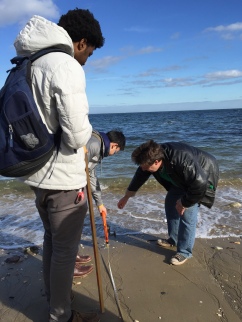 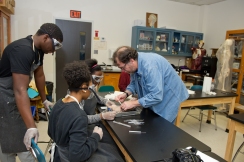 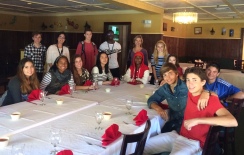 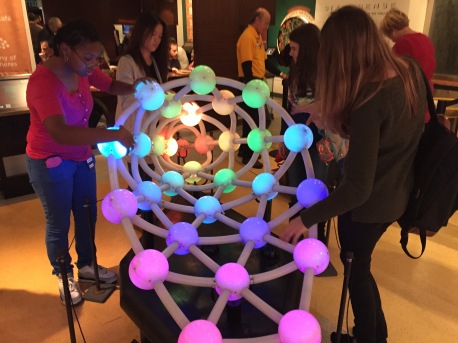 Math = Beauty students at the Museum of Mathematics 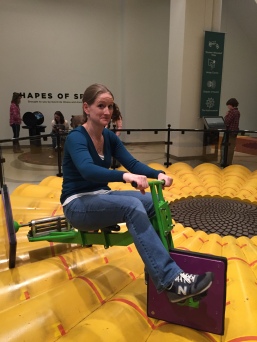 Mrs. Holm rides a square-wheeled tricycle at the Museum of Mathematics 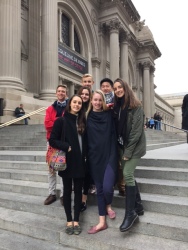 Art History students visited the MET and the Frick in NYC 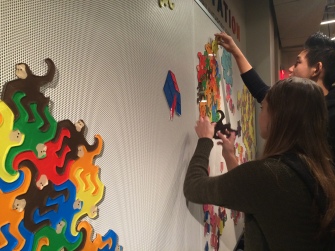 Tessellation practice at the Museum of Mathematics 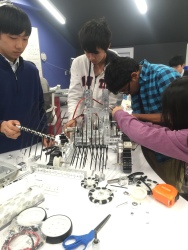 The Robotics team works on their sweeper bot 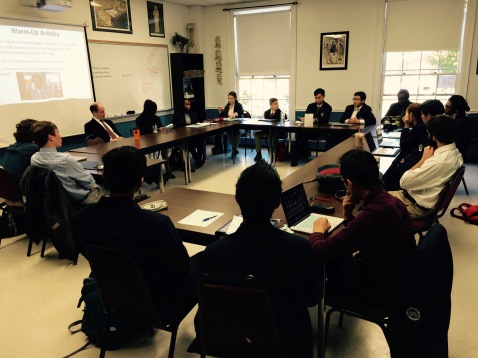 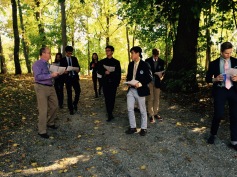 Mr. Brummeler takes his Philosophy students outside for a discussion 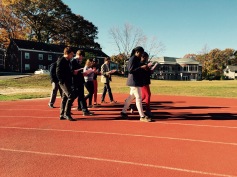 Dr. Tietjen takes his Philosophy teaches his students the way Aristotle did – by walking and talking 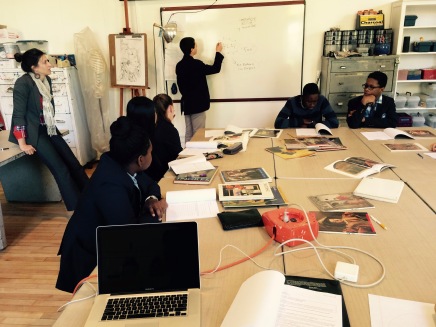 Mrs. MacDonald gets students started on their portrait projects 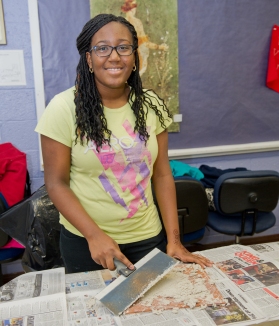 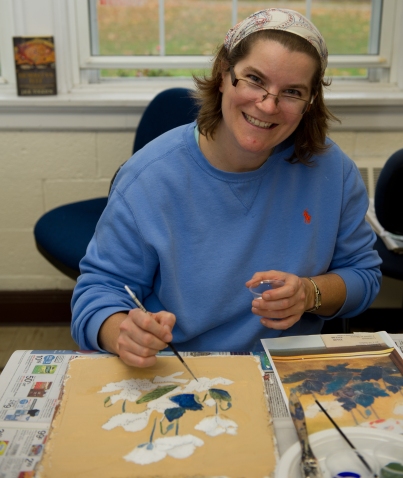 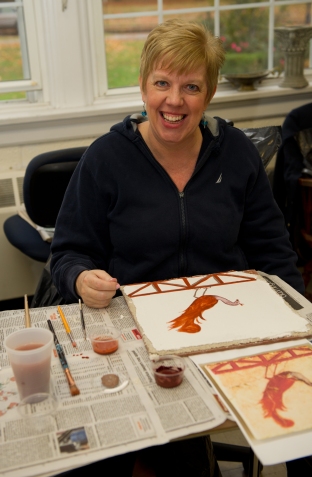 The iconographer teaches students who to separate a yolk for the paint using only his hands (Note: no Middle Schoolers were harmed in the separating of this egg yolk) 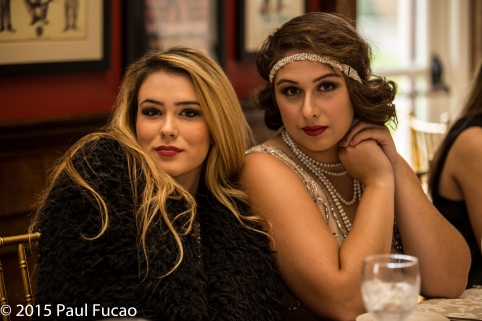 Two Flappers and Philosophers relive the 20’s at Oheka Castle 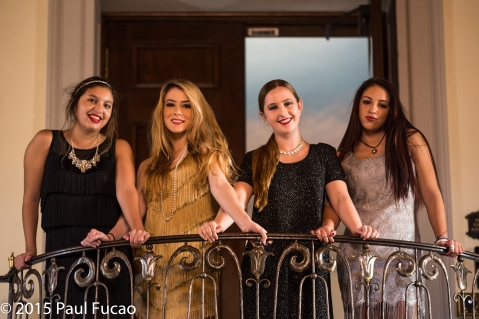 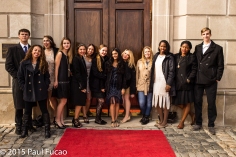 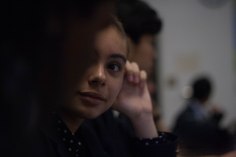 A Science and Theology student participates in a discussion